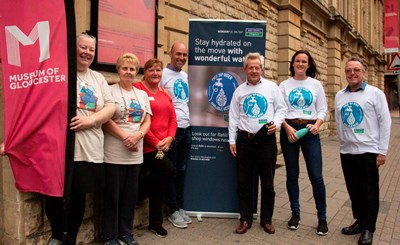 Refill is a national charity supported locally by Severn Trent Water and Gloucester BID. Its initiative is being adopted in the city; the idea being to change the way people think about buying bottled water, and as a result reducing plastic pollution. Like in every city across the UK, plastic pollution has become an issue and charities such as Refill are coming up with ingenious ways to counter the problem.

The charity has developed an app (Refill) so the user can locate the nearest participating business. These businesses have stickers on their windows promoting Refill’s charitable service inside. The stickers are to encourage people to visit the store knowing they will be greeted with a smile, even if their intentions is only to fill up a water bottle.

Cllr Richard Cook cabinet member for environment at Gloucester City Council said: “I believe it is everyone’s duty to recycle and reuse plastics wherever possible. I think Gloucester Refill provides our city with a fantastic opportunity to reduce the amount of plastic we throw away and to make us aware of what we can do to reduce the damage caused by throwing away reusable plastics.