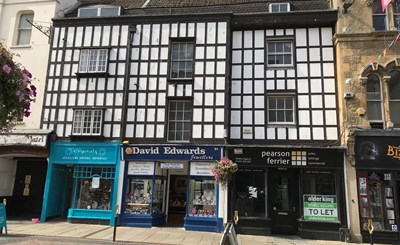 Developers are being invited to submit expressions of interest to develop one of Gloucester’s most cherished historic buildings.

It offers scope for an innovative scheme and could see it play a key part in the city’s massive multi-million pound regeneration programme that is currently taking place.

The inn sits at the heart of the complex and stands above a 12th Century undercroft known as the Monks Retreat and a timber framed extension dating to the 17th century.

It is thought to have been the original Great Inn, which later became the Fleece Hotel and was gradually expanded to create more accommodation over a period of 300 years.

Having a hotel on the site dates back to 1497 and it was a resting place for pilgrims visiting the tomb of Edward II of England.

The city council acquired the site from the former South West Regional Development Agency when it was wound up in 2011.  Since then, the council has invested significant sums to secure the site and undertaken de-risking works, including archaeological excavation and an intrusive site investigation to inform future development.

Expressions are sought that complement the council and its partners’ ambitious plans for the city as the site is just minutes from several multi-million regeneration schemes that have been undertaken or are currently underway.

These include the Gloucester Quays development that attracts millions of visitors to the city, the state of the art bus station that is currently being constructed, the new public space outside the Cathedral created as part of Project Pilgrim and the Kings Quarter scheme, which will see a complete transformation of the gateway to the north of the city.

Councillor Paul James, Councillor Leader of Gloucester City Council, said: “These are exciting times in Gloucester with the city undergoing a massive transformation and benefitting from considerable investment in a range of developments. This is a chance to be a part of this and we welcome innovative schemes that reflect Gloucester’s huge potential by making the most of this much loved historic building.”

The council is open to bids where it would be a partner in the scheme and will consider proposals from developers, investors, occupiers and consortia.