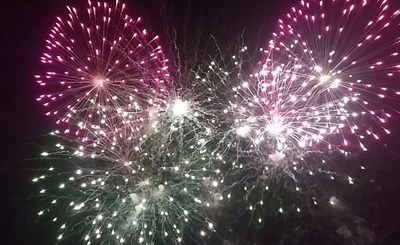 Families are being invited to enjoy the Gloucester Park Fireworks Spectacular this Saturday that promises a jam-packed evening.

The annual firework display is organised by the same team behind the London 2012 Olympics fireworks, Edinburgh Castle Hogmanay and New Year’s Eve at the London Eye.

Heart Radio Breakfast presenter Miles Galloway will be compering with music from 7pm to get the party started before the display at 9.40pm and entry is free.

The fireworks are just one of a number of events being held at the park and around the city this Summer.

Until August 5 Bob Wilson’s travelling funfair will be at there, with it’s internationally renowned attractions including a stunt show and Victorian magic workshop where children can learn tricks.

The two events are part of the Summer of Music, Arts and Culture (SoMAC) programme full of events that has included the Rhythm and Blues Festival and the Art in the City.

Still to look forward to is the Gloucester Retro Festival on Saturday, August 25 which will see Gloucester’s pedestrian gate streets travel back in time.

Each street will be themed to a different decade and boast a collection of vintage, cars, motorbikes, scooters and commercial vehicles.

Also coming up is Gloucester History Festival which runs from September 1-16 starting with the Gloucester Day Parades and includes City Voices events where local communities tell their own stories, Heritage Open Days and talks at Blackfriars

Highlights include talks by bestselling historian and broadcaster Lucy Worsley who will be exploring the life of Queen Victoria and broadcaster Jenni Murray, speaking about some of history’s most influential women.

The Summer programme comes hot on the heels of Gloucester’s award as a Purple Flag City.

The Purple Flag Award similar to the blue flag for beaches is awarded to cities or towns that show that they have a safe and thriving night-time economy.

Lise Noakes, cabinet member for culture and leisure said: “Partners across the city have organised some fantastic events this Summer and I urge people to take a look at what’s on, there’s literally something for everyone.”