Gloucester’s state of the art bus station will open this month as the first project to be completed in the multi-million pound revamp of the north of the city centre. 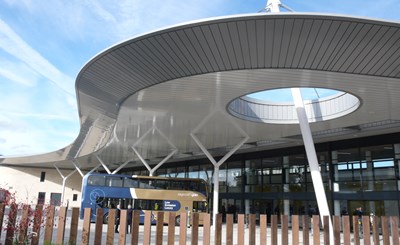 The £7.5 million bus station is the first step in the ambitious Kings Quarter regeneration scheme planned for the area, which is currently out for public consultation.

The glass fronted bus station will feature digital screens with real time information for passengers, toilets and seating areas as well as a display of the Roman wall, that was discovered underneath the foundations.

It is also equipped with solar panels to power internal lighting and has been designed to be fully accessible for people with disabilities.

Funded by Central Government, through the GFirst LEP, and the City Council it has space for 12 bus bays as well as a café and shop.

On Friday, October 26 an opening ceremony will take place attended by a number of local representatives including the Mayor of Gloucester and MP Richard Graham.

It will be followed by a public open day on Saturday, October 27 from 10am – 4pm, when residents, shoppers and visitors will be invited to have a look around the new facility.

The event will be kick started by a cavalcade of 15 vintage buses which will drive across the centre of the city.

A normal bus station timetable will then commence on Sunday, October 28.

Leader of Gloucester City Council, Councillor Paul James, said : “I am absolutely delighted that we are able to announce the opening of the bus station. This is a significant milestone for us in terms of the regeneration and I believe that it sends out a message that we are determined to deliver the transformation of this part of the city. I know people will be very interested to come and have a look inside so I hope they will take this opportunity to come along to our open day and see how much more welcoming, modern and efficient the new bus station is.”

David Owen, CEO GFirst LEP, said: “It’s great to see the amount of regeneration taking place right in the heart of the city. The new Transport Hub is a real asset for Gloucester, making connectivity within the city much easier and more accessible for everyone.”

Minister for Local Growth, Jake Berry, said: “We’re committed to boosting economic growth across the whole of the UK and building a Britain fit for the future. I am delighted to see the completion of the new multi-million pound bus station for the people of Gloucester. The £6.4million contribution, drawn from the Local Growth Fund, demonstrates this government’s commitment to continually improve the connectivity within the South West - aiding businesses and residents alike.”

Nick Fairham, Architect Director for architects BDP, said: “The opportunity to design and deliver the new transport hub for the city of Gloucester was a real privilege.  Buildings such as this often set the first impression of a city and the design aims to reflect the ‘spirit of place’ that Gloucester offers. The single roof plane is designed to resemble an aircraft wing in celebration of the city’s unique aviation heritage, while providing an iconic structural form that allows as much light as possible to flood the concourse and stands. We hope this building is a catalyst for the regeneration and continued prosperity of the city.”

The opening of the bus station follows the announcement of the Kings Quarter plans which are currently undergoing a public consultation.

They will see a refurbishment of Kings Square, the city’s main central public space around which the new quarter will be based, making it into a space for events and performances.

The buildings around the square will then be redeveloped into offices and apartments, a hotel and a creative business hub.

Gloucester railway station is also set to be improved following a successful application by Gloucester City Council and Great Western Railways to the GFirst Local Enterprise Partnership Growth Fund, for funding of £3.75m.