Gloucester City Council welcomed a team of senior Chinese officials, from the Zhejiang Province to Gloucester on 8th November 2018. 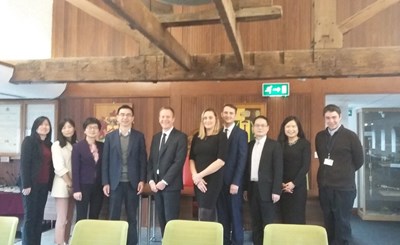 The meeting took place in the City Council chambers and was an opportunity for the Council to present Gloucester’s ongoing regeneration programme and the attractiveness of the City as an investment location for Chinese businesses.

A group of six influential Chinese provincial leaders took part in the meeting, led by the Director of the Zhejiang Provincial Development and Reform Commission. The visit was arranged by the Gloucestershire based firm, Join In China, which specialises in building trade links between the UK, China and Hong Kong.

Cllr Paul James, Leader of Gloucester City Council, said: “Gloucester presents massive investment opportunities for Chinese firms, be it within our flagship city centre regeneration schemes or alongside our diverse business community. The visit was a good opportunity to build a working relationship with Chinese government officials, which will hopefully lead to increased economic engagement.”

The delegation also met Natalie Wadley and Luke Wadley from Gloucester based ChangeMaker3D, who are pioneering 3D design in the field of innovation and social change. The Chinese delegates learned about this highly innovative digital technology, and will explore opportunities for Chinese businesses to get involved with the firm. The Chinese delegation, the City Council and ChangeMaker 3D look to build on the meeting and to create economic ties between the two areas.