Mayor of Gloucester completes her Beat the Street challenge 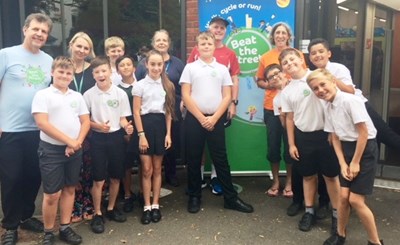 Gloucester turned into a giant game during June and July as thousands of residents walked, ran or cycled 72,000 miles around the city for points and prizes.

Cllr Joanne Brown, Mayor of Gloucester, loves to cycle and really got behind the project by challenging herself to tap all 71 boxes during the 6 weeks of the game. She has been raising money for the James Hopkins Trust during the challenge.

On Wednesday 18th July at 2.30pm, at Box 3, outside of Longlevens Library she completed the challenge. Whilst on her bike, she was joined by fellow Beat the Street fans Cllr David Brown and Cllr Paul James who were all cheered in by staff from the library and students from Longlevens Junior School.

Cllr Joanne Brown, Mayor of Gloucester, said: “I love to cycle anyway, but this encouraged me to go out and visit lots of different places around Gloucester. I met lots of people and had some really great chats with the city’s residents. It’s brilliant to hear children swapping the laptop or Xbox for walking with their friends and family – I hope everyone has enjoyed it as much as we have.”

Cllr Paul James, leader of Gloucester City Council, said: “It’s been great to be involved with the project. I’ve heard some lovely stories about families and neighbours playing for their local school - there has been a real buzz across the city. It’s encouraged me to create some new running routes.”

Running from 7 June and 19 July, Beat the Street was a free, fun challenge where people were rewarded with points and prizes for exploring their city on foot or bicycle. Beat the Street was the first project of Gloucestershire Moves, a new countywide initiative to get people moving more.

There were 71 special sensors called ‘Beat Boxes’ across the city. Players tapped the Beat Boxes with cards and fobs to track their journey and earn points for themselves and their team – the more Beat Boxes people swiped the more points they earned.

Hundreds of pounds worth of prizes were donated by local businesses and activity providers to reward individuals, families and schools who took part and to encourage them to continue to get outside and be active.

To celebrate everyone’s achievements during Beat the Street there will be a fun event and winners presentation at Matson Rugby Club lead by the Mayor. Everyone is welcome to join in the fun on Thursday 26th July, 11 – 2pm.

Want to find out more about Beat the Street? Visit beatthestreet.me/gloucester for more information.