Gloucester City Council has given NATO's Allied Rapid Reaction Corps (ARRC) Freedom to the City at a special council meeting attended by the ARRC and South Korean Ambassador. 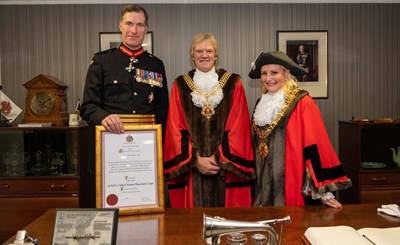 The ARRC, which is based at Imjin Barracks at Innsworth, has been given the honour for its contribution and support of the country and city.

The honour was agreed at a special council meeting last night (Wednesday 27 November), which was attended by personnel from the ARRC. Also at the meeting was the South Korean Ambassador, Her Excellency Ms Enna Park, and a delegation from the Embassy of the Republic of Korea.

The ARRC is the United Kingdom’s leading land warfare contribution to NATO, and since forming in 1992 has become NATO’s most operationally experienced multinational corps. It formed from the former 1st British Corps that served in West Germany throughout the Cold War, and spearheaded the allied campaigns in Bosnia, Kosovo, and Afghanistan.

Until 2010, the ARRC’s headquarters was in Rheindahlen, Germany before it was moved to its current location at Imjin Barracks. September 2020 marks the 10th anniversary of the Allied Rapid Reaction Corps moving into the local community.

The council and city of Gloucester have a special relationship with the Republic of Korea, which comes from the Gloucestershire Regiment’s involvement in the Korean War. The ‘Glorious Glosters’, as the regiment became known, supported South Korea and its allies when Chinese forces sought to gain ground in the war, particularly at Imjin River.

The Right Worshipful Mayor of Gloucester Cllr Colin Organ says: “Gloucester has a special relationship with the ARRC, which since moving to Imjin Barracks has truly become a part of the city.

“Teams from the ARRC participate in sporting events like the Gloucester 10k and Dragon Boat Racing; it plays a leading role in Armed Forces Day and Remembrance services; and supports the Soldiers of Gloucester Museum, Gloucester Cathedral and Gloucester Rugby.

“The ARRC is based at Imjin Barracks, named after one of the Gloucestershire Regiment’s most significant battles. It’s a privilege not only to be able to honour the ARRC with the Freedom of Entry of the City, but to do it with our friends from the Republic of Korea here in Gloucester with us, with whom we share a deep and powerful connection.”

Lieutenant General Sir Edward Smyth-Osbourne KCVO CBE said: “The decision to award the Freedom of Gloucester marks and strengthens the relationship between the city and NATO’s Allied Rapid Reaction Corps.

“Our multinational troops and their families are very fortunate to be able to count on your support.

“2020 marks the tenth anniversary of the ARRC’s arrival in Gloucester, and I look forward to exercising our Freedom as part of our celebrations.”

The Republic of Korea’s Ambassador in London, Her Excellency Ms Enna PARK comments: “Imjin Barracks is named after the Battle of the Imjin River in which the Gloucestershire Regiment made a huge contribution to the preservation of the freedom of Korea against a communist invasion.

“This holds great significance for us as it is the only barracks in the UK whose name honours those who sacrificed during the Korean War. It is my privilege to be here today to congratulate the Allied Rapid Reaction Corps which is based at such a special location.”