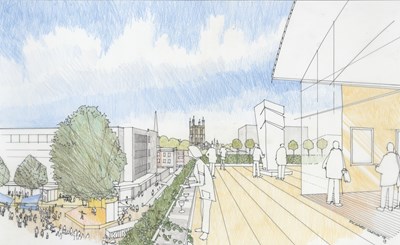 At this month’s cabinet meeting (July 10) councillors will be asked to back the demolition of the car park along with Bentinck House and the partial demolition of Grosvenor House.

The plans will allow the regeneration project to move forward, which will see a multi-million pound transformation take place, including an overhaul of Kings Square, the building of a new multi-storey car park, more than 150 homes and 40,000 sq ft of office space.

Once the buildings are demolished it will allow further archaeological investigations to take place.

Recent investigations under the old bus station and the former Furniture Recycling Store have found remains associated with the Carmelite Friary (Whitefriars) thought to have been there since 1268.

A human burial was found on site, this is most likely one of the friars or a patron of the friary.  The body has been left in place as the new development will be designed to ensure, as much as possible, that any human burials are undisturbed.

Following the demolition of Bruton Way car park and Bentinck House, it is proposed to use the cleared site for a temporary car park prior to development.

The plans follow the recent announcement of designers Michael Grubb Studios (MGS) and George King Architects (GKA), both local to the South West, being chosen to come up with a lighting design for Kings Square and an innovative approach to the structural edges within the square.

A panel of local representatives from Gloucester cultural and arts organisations was also set up to ensure a diverse and quality range of cultural and artistic events take place in the square catering for both residents and visitors.

Proposals for the square will include the relocation of the World Cup Rugby Bench and the public toilet currently outside of the Post Office. A special Changing Places Facility is included in the plans which allows for people who have physical disabilities and who need more space and equipment to use toilets safely and comfortably.

The council and its partners Reef Group were presented with the prestigious MJ Award for Innovation in Property and Asset Management last week for the Kings Walk development plans in recognition of the bold and ambitious project.

If given the green light for demolition it is intended it will take place in spring next year and preliminary work is set to start on the Kings Square refurbishment by autumn 2020.

Leader of the Council, Councillor Paul James, said: “ I know residents are very keen for us to get on with the regeneration work in Kings Quarter and so far we’ve done a significant amount of work behind the scenes, such as the important archaeological investigations.

“These proposals should show the progress that is being made in driving forward such an ambitious project and making Gloucester a more vibrant and attractive place in which to live, work and visit.”