Gloucester City Council has won a national award for Innovation in Property and Asset Management for its city centre development plans. 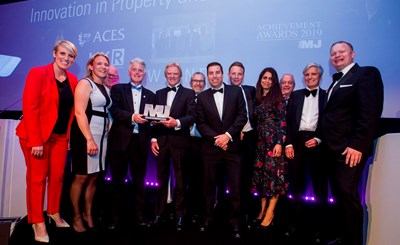 Last night’s prestigious MJ Achievement Award ceremony saw the council take home the accolade for its ambitious Kings Walk plans that are set to transform part of the city and will complement the planned Kings Quarter development.

The MJ Awards recognise the best in local government and the city council won based on its partnership with Reef Group, as the delivery partners of the Kings Walk Shopping Centre.

Reef and the city council have worked together to create the bold regeneration plans for the centre and to attract new high profile tenants.

Judges were impressed by the city council and Reef’s approach to revamping Kings Walk saying the council had shown others how such a scheme can be achieved and congratulated it for ‘meeting the challenges head on’.

The overhaul of the Kings Walk shopping centre at a cost of around £7 million sees a total revamp of Kings Walk and Clarence Walk, the construction of a modern glass atrium and new contemporary looking entrances. The work is in addition to the £5 million scheme for Kings Square due to start in autumn.

It includes refurbishment of the former BHS store on Eastgate Street set to be occupied by a major retailer.

Already underway are improvements to Kings Walk Shopping Centre’s roof top car park which will be followed by upgrading of the street frontage facing Eastgate Street.

New public toilets are also featured incorporating a Changing Places facility for people who have physical disabilities and who need more space and equipment to use toilets safely and comfortably.

The partnership between the Council and Reef Group not only enables the regeneration of Kings Walk but also allows the Council to benefit from growth in the rental income to support the services it provides.

Future phases of the regeneration plans will also bring in new uses to Kings Walk to reduce its reliance on retail and add vitality to the area.

Leader of Gloucester City Council, Councillor Paul James, said: “We’re over the moon at winning this award. It’s testament to the strong and dynamic partnership we have with Reef and the clear vision we both have for the city.

“I’d like to congratulate everyone who has worked so hard on this project and yet again we have proven that Gloucester can compete on both a regional and national scale.”

Development Director at Reef, Pete Langley Smith, said: “We’re delighted to be working in partnership with the City Council on this exciting scheme and we’re very proud to a part of what is now an award winning project.

“We’re committed to Gloucester and passionate about the potential of the city centre to be a thriving and modern place where people love to work, live and visit.”