Councillor Colin Organ has been sworn in as the new Mayor of Gloucester at the city’s full council meeting today. 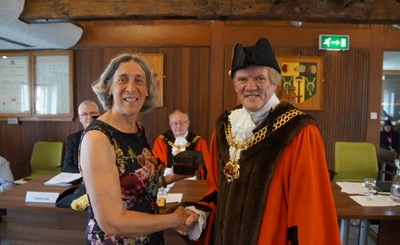 He will step down from his position in Gloucester City Council’s cabinet as the member with responsibility for planning and housing. He will be replaced in the cabinet by Cllr Andrew Gravells.

Cllr Organ said: “It’s a great honour to be appointed mayor of our wonderful city. I look forward to meeting as many people as I can during my year in the role and attending lots of events.

“There is so much to celebrate and enjoy in Gloucester and I can’t wait to get out and about and promote our beautiful city.”

He will be joined in civic office by Cllr Collette Finnegan as Sheriff and deputy mayor, replacing Cllr Howard Hyman in the role.

Outgoing mayor Cllr Joanne Brown thanked everyone for their support during her year.

She said: “It’s been a privilege to be the Mayor of Gloucester and I’ve thoroughly enjoyed my time in the role.

“I’ve met lots of people and am grateful for the warmth and friendliness they have shown me. I’m sure Colin will have a fantastic year.”

Council leader Cllr Paul James said: “Joanne has been a wonderful mayor for our city. I’ve no doubt Colin will also do a great job representing Gloucester and thank him for his efforts in his cabinet role.”

The charities to be supported by the mayor and Sheriff during the civic year are the Alzheimer’s Society, MS Therapy Centre and Gloucestershire Young Carers.