The Monument owned by Gloucester City Council is having a clean up, which should be finished towards the end of next week 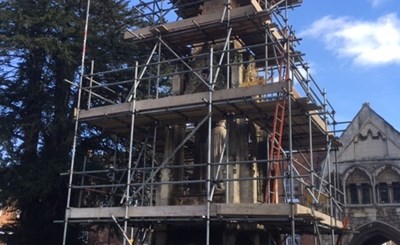 Over the years, dirt, pollution, moss and bird droppings have collected on the monument which has a damaging affect on the monument’s soft limestone, which starts to crack and flake away. Some years ago repairs were made to the finials but these haven’t lasted, so it was time to act before further weathering occurs.

The monument is being cleaned using a gentle water pressure to remove the grime and moss, and it will then be given a lime shelter coat to protect the friable surface from further weathering. The current works which will cost £8,000, will help to protect the monument and slow weathering.

Although the monument will be clean and have some protection from the weather, some detailed elements of decoration have worn away and become detached. The finals or ‘poppy heads’ are beyond conservation and new ones need to be carved.

The City Council is obtaining quotes for this so it can actively source funding to replace them, but as the Monument is owned by the Council many normal funding sources don’t apply. Going forward it is hoped that enough funds can be raised through partnership with the City Council and community groups to reinstate the original details. Unfortunately this can’t be done in the current phase of work as the cost will be high.

Cllr Paul James, leader of Gloucester City Council said: “It will be fantastic to see the Bishop Hooper Monument restored to its former glory. Now that the cleaning is nearly complete, we will turn our attention to planning the restoration and are considering plans to fund this in partnership with community groups. This could include training young people in stone carving and masonry skills, something we‘ve already seen work successfully with reinstatement of the railings at St Mary De Crypt.”