An apple tree has been planted by the Lord Lieutenant of Gloucestershire, Andrew Gillespie, to mark the 10 year anniversary of HM Queen Elizabeth II visiting Gloucester Quays. 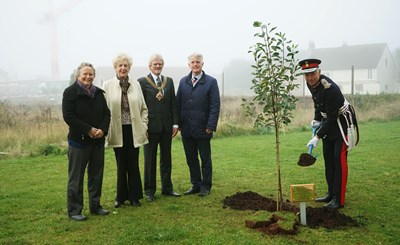 A tree has been planted to commemorate the 10 year anniversary of Her Majesty Queen Elizabeth II’s visit to Gloucester Quays.

The Lord Lieutenant of Gloucestershire, Edward Gillespie OBE, planted the apple tree at Llanthony Secunda Priory, alongside the canal – where a decade ago The Queen stepped off a boat after a short trip up the canal and went for lunch at the adjacent Gloucestershire College Campus.

HM The Queen came to Gloucester Quays on Friday 23 October 2009 to view the completion of its first phase of development including the Outlet Centre.

The area has benefitted from further regeneration there since, including the development of the leisure quarter with a new cinema, restaurants and bars, and the completion of Phase I of the Bakers Quay development.  New residential schemes by McCarthy & Stone and Crest Nicholson are currently on site.

There has also been significant conservation and restoration of the Priory’s historical buildings and grounds.

Leader of Gloucester City Council, Cllr Paul James says, “Since Her Majesty the Queen’s visit in 2009, Gloucester has come a long way with the completion of a number of projects that have significantly uplifted the city.

“It’s incredible to look back at the progress over the last 10 years.  It was a very special day for the city, so we wanted to mark it in some way.  As well as looking back, it also encourages us to look at the exciting projects currently underway and those we are planning for the future.”