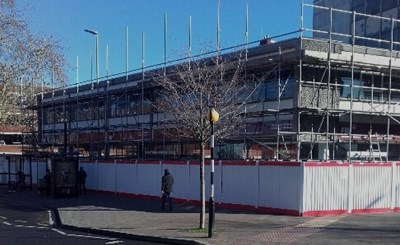 The regeneration of Gloucester’s Kings Quarter will take another major step forward - and could uncover links with its past too.

The latest phase of work will start on site today (28 January) with the demolition of part of the ageing Grosvenor House building and former bus station in preparation for the £85m regeneration project.

This is happening alongside archaeological work to uncover what could be nationally important heritage assets, at the site between Northgate Street and Station Road.

It is believed that the missing Whitefriars monastery could be found under the existing bus station, and demolition work will allow the site to be excavated before building work to create the new development begins.

Cllr Paul James, Leader of Gloucester City Council, said: “It’s incredible to think of what lies beneath our city and that somewhere around this area could be Whitefriars Monastery. If we do manage it find it, it will help us to better understand the history of this part of the city and we can ensure whatever remains is preserved ahead of the regeneration of the area.”

Specialists Oxford Archaeology have been appointed to carry out the archaeological works by Gloucester City Council. The council aims to transform Kings Quarter into an attractive new gateway to the city centre.

The team of experts will work alongside the project’s main contractor Smiths, who will oversee the demolition of the old bus station.

It is hoped that by digging seven trenches ranging from 20m x 2m and 2m x 2m around the site,  further parts of the original Roman city Glevum as well as a Carmelite Friary (Whitefriars) thought to have been there since 1268, and evidence of a medieval and possibly Saxon settlement will be revealed.

Andrew Armstrong, Archaeologist at Gloucester City Council said: "We have already uncovered evidence of two Roman buildings and parts of what we think were the monastery chapel were found in 1974 – so we are keen to explore if this missing monastery does sit under the bus station.

“We are required to research sites before any major new developments take place, so we know exactly what archaeology is there. We will then work to ensure that archaeological remains are preserved beneath the new buildings.”

The start of work is part of wider plans to transform this part of the city centre, which includes major investment in improving Kings Walk shopping centre, which was approved by the council’s planning committee last year.

Modern businesses will find opportunities here too, through plans to invest in a creative hub to provide flexible support for SMEs and start ups and a food quarter, bringing the area’s best culinary concepts to the heart of the city.