Bruton Way car park will soon be gone as demolition nears completion, with the adjoining Bentinck House to follow and expected to complete by the end of May. 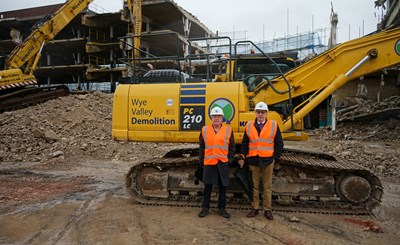 The regeneration of the Kings Quarter has progressed to the next stage with the demolition of Bruton Way car park.

The removal of the building, and the adjoining Bentinck House, is an important step in Gloucester City Council’s plan to give the area of the city a much needed facelift.

The ambitious plan to regenerate Kings Quarter includes the site of the car park for buildings of mixed use, from office and commercial space to a hotel, residential properties and car parking.

Cllr Cook says: “This is a really exciting step in our ambitious project to revitalise an area of the city centre that has needed a facelift for years.

“After visiting the site we can see exactly how it fits in with our long standing vision for the area and the difference it will make to the city, its residents, and visitors. We’re looking forward to taking the next steps in our Kings Quarter project.”

Gloucester City Council’s proposals for the Kings Quarter regeneration received approval from the planning committee on Tuesday 3 March, with work beginning in earnest later in the spring.