Remains of a Medieval friary have been found underneath the site of the now demolished Bruton Way car park. 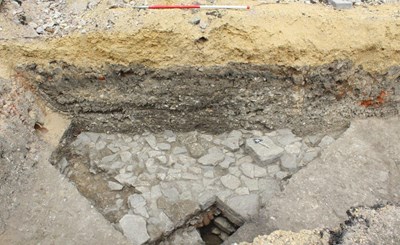 Archaeologists have found the remains of a medieval friary in Gloucester following the demolition of the former multi-storey carpark on Bruton Way. Historians have been attempting to pinpoint the location of the ‘Whitefriars’ Carmelite Friary for decades.

The site was investigated by archaeologists from Gloucester City Council and Cotswold Archaeology on behalf of Reef Group, which is working with the Council to bring forward a £85m scheme to regenerate the Kings Quarter area. This includes The Forum - a new social and digital campus for the South West.

Archaeologists have long suspected that the Bruton Way bus station and carpark was the site of ‘Whitefriars’, a 13th century friary founded by the Carmelites, one of the Roman Catholic Church’s four great mendicant (living by charity) orders. They have been working on the site for more than a year.

Andrew Armstrong, City Archaeologist at Gloucester City Council, said: “For around three hundred years, Whitefriars played an active part in Gloucester and produced some notable friars including Nicholas Cantelow (or Cantilupe) in the 15th century. It’s very exciting to finally reveal the exact location of this ‘long-lost’ friary. Seeing and documenting this site will serve to underline, and recognise, the place of the friary in the city’s history.”

Gloucester’s Whitefriars owned most of the land between what is now Station Road and Bruton Way, which is shown in some historic maps as ‘Friars Ground’. Whilst a variety of sources suggest the Friary itself was located at the western end, next to Market Parade, historians have been unable to confirm the precise location of the friary until now.

Whitefriars was one of several important religious houses in medieval Gloucester along with Llanthony Priory, the Blackfriars and the Greyfriars. Whitefriars’ place in the city’s history has tended to be overlooked because of the lack of identifiable remains.

Cotswold Archaeology and the Council’s investigation suggests there were at least four large medieval buildings at the site. These buildings were either built of stone or had stone footings with some of the walls measuring a metre wide.

The archaeological team has also found the remains of tiled and mortared floors, and part of a medieval drain. Importantly, some of the larger walls are aligned east-west – a typical feature for a medieval ecclesiastical building.

Details about these findings will be included on information boards that will soon be installed on The Forum development site. The public is currently being invited to share their views, and find out more, about The Forum via the project’s website.

Esther Croft, Development Director at Reef, added: “Working in partnership with the City Council, our aim is to deliver The Forum with the least possible impact on these important archaeological remains.

“We expect, as the development moves forward, that further archaeological investigations will be needed, hopefully improving our understanding of this intriguing site. We look forward to sharing the full results of this dig, and any future archaeological work, with the people of Gloucester.”