Museum of Gloucester needs you to help save paintings!

The Museum of Gloucester has launched a crowdfunding campaign to save 4 rare oil paintings by Gloucestershire based puppeteer and woodcarver William Simmonds.

After being lost for decades 4 rare oil paintings need some much needed TLC. The Museum of Gloucester has already saved 1 painting for future generations, and the museum is now asking the public to donate to an online crowdfunding campaign to help get the other paintings conserved.

The paintings, by Gloucestershire based puppeteer and woodcarver William Simmonds, were discovered in his studio in the mid 1980s following his death and had not been seen for decades. After being left for so long, the oil paint artworks are at risk of being lost forever.

'A Vale' by William Simmonds

The museum needs to raise £6000 to have the paintings professionally conserved, including restoration to missing paintwork and re-framing.

Very few of Simmonds’ paintings are in public collections and are mostly works on paper. The Museum of Gloucester holds the only publicly owned oil paintings by the artist. Public ownership means they belong to everyone, and the museum wants to have the artworks conserved so that they can be enjoyed by all. 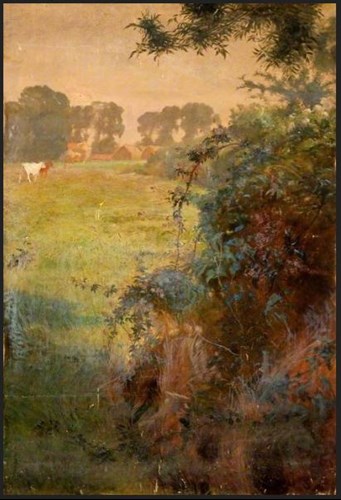 'A Meadow' by William Simmonds

Cllr Steve Morgan, cabinet member for Culture and Leisure at Gloucester City Council said: “Please take this opportunity to join me in helping save these beautiful paintings. For the price of a few cups of coffee we can make sure that future generations will be able to enjoy these special works of art.

“William Simmonds was a significant figure in the county’s arts and crafts movement, and these artworks play an important role in that history.”

One of the paintings, ‘Fairies Frolic’ has already been conserved and is on display in ‘The Magical World of William Simmonds’ exhibition at the Museum of Gloucester. The exhibition runs until Saturday 18 April 2020 and also features some of Simmonds’ exquisite puppets and woodcarvings. 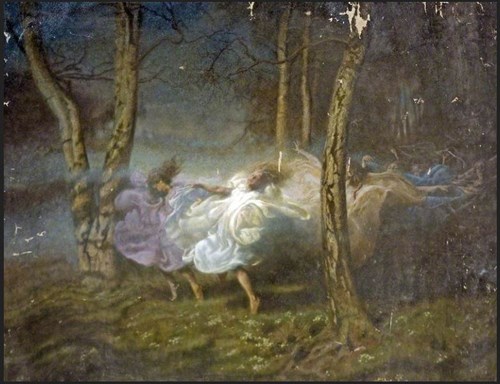 'Fairies Frolic' by William Simmonds before it was conserved

William Simmonds (1876-1968) was a puppeteer, woodcarver and painter. Born in Istanbul, he swiftly fell in love with the English countryside when his family returned to England. He studied to be an artist and, as a young man, started to make a career for himself exhibiting at the Royal Academy and illustrating books.

By 1914 Simmonds was part of the Arts and Crafts Movement, and more avant-garde art scenes in London. In 1919, after the war, he and his wife Eve settled in Far Oakridge, near Stroud.

The crowdfunding campaign aims to raise £6000 and runs until 5 March. You can pledge towards the campaign target at www.crowdfunder.co.uk/the-magical-world-of-william-simmonds