Residents encouraged to remember the fallen in private tributes

Residents are being encouraged to mark this year’s Remembrance Sunday at home as the annual public memorial won't be held due to the restrictions around the Covid pandemic. 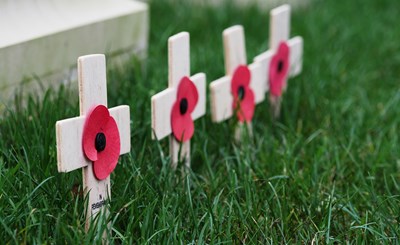 To meet social distancing guidelines and to keep people who usually attend safe, the annual Service of Remembrance at Gloucester War Memorial will not be held this year and, in line with national guidance, there will not be any military parades.

Instead the Mayor of Gloucester, Councillor Kate Haigh, will attend both ‘old’ and ‘new’ cemeteries on Tredworth Road, to pay her respects.

She will be joined by representatives of the Royal British Legion, the City Marshall, the Sword Bearer and leader of the Council, Councillor Richard Cook.

Following this they will attend a private service at the Hussar’s Memorial Service on College Green.

Later the civic party will join other representatives from the Gloucester City Council and the city, including MP Richard Graham for a socially distanced ceremony at Gloucester Cathedral

The ceremony will be live-streamed so that people will be able to watch it online at home.

Other ways residents are being encouraged to mark the day include standing on their front doorstep to mark the two minute silence at 11am.

The Royal British Legion also suggests that people can hold a small service in their garden or help children to create Remembrance artwork to display in their windows.

In addition, anyone who wants to lay their own wreath can visit one of the war memorials around the city.

Mayor of Gloucester, Councillor Kate Haigh, said: “I know how important Remembrance Day is but this year we are having to do things differently and safely. I hope people will find other ways to remember the huge sacrifices our service personnel make for our country and urge everyone to make sure they still support the poppy appeal, which gives vital support to the armed forces community. We stand together to remember the fallen."

Garry Mills, President of the Royal British Legion in Gloucester and Membership Council Representative for South West Midlands, said: “I’d like to thank the public in Gloucester for their unwavering support of the armed services community. Over the years they have worked tirelessly to make sure the sacrifices made have not been forgotten. We recognise that this year, circumstances are different and I encourage everyone to stop at 11am for a few moments on both Remembrance Day and Armistice Day, to recognise the sacrifices that people have made to protect the freedoms that we all take for granted. I would also urge people to please support the poppy appeal.”

To watch the ceremony on Remembrance Day at Gloucester Cathedral visit www.gloucestercathedral.org.uk