Woman banned from city centre after begging from vulnerable people

Sonya Kirby targeted vulnerable people in Gloucester, asking them for money despite having accommodation and access to support agencies. 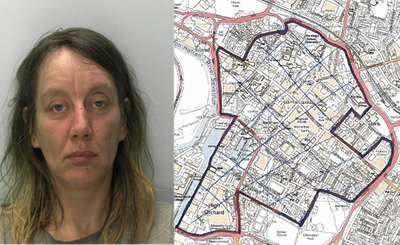 On 29 January 2020, Sonya Kirby, of Russell Street in Gloucester, was served with a civil anti-social behaviour injunction (ASBI) at Cheltenham and Gloucester County Court.

Solace received numerous reports from members of the public, City Protection Officers and businesses in Gloucester city centre that Ms Kirby was targeting often extremely vulnerable people and asking them for money. This is despite her being in suitable accommodation with access to support agencies.

The case was brought against Ms Kirby by Project Solace, a joint team of officers from Gloucestershire Constabulary, Cheltenham Borough Council and Gloucester City Council.

Louise Boyle, Solace team leader, said: “We hope that this injunction will protect the most vulnerable people in our city from parting with cash under false information. Ms Kirby is housed and has numerous support agencies available to her. The injunction has been put in place to help her to fully embrace the support on offer, which we hope she will continue to do.”

Cllr Jennie Watkins, cabinet member for communities and neighbourhoods at Gloucester City Council, said, “We take pride in our city’s night time economy, and it is understood Ms Kirby would harass people under the influence of alcohol for money, as well as target vulnerable people during the day. Officers always try to engage and encourage people to use the support on offer; however we will not tolerate persistent harassment directed towards vulnerable people.”

Justin Hudson MBII, Chair of Gloucester’s LVA, and Vice Chair of Nightsafe said: “Working with multiple agencies within the City Centre, Sonya Kirby was a habitual offender that ‘worked’ the night time economy by begging, praying on lone and vulnerable people.  After a multi-agency approach, Ms Kirby was found suitable accommodation and is offered on-going support from other agencies. I would like to thank the work of the Solace team in keeping Gloucester city centre safer. This injunction will help improve people’s experience of our night time economy.”

The civil injunction order imposed by the courts forbids Ms Kirby from:

1.  Engaging in conduct which causes or is capable of causing alarm, harassment and distress to any person within the city of Gloucester;

2.  Entering or being in the area outlined Blue on the map attached at any time save for attending pre-arranged appointments provided that the claimant receives an email from the agency confirming the date and time.

3.  Asking any person for money at any time within the city of Gloucester.

4. Obstructing the highway by sitting, standing or squatting on the footpath or street or public highway within the city of Gloucester, with or without belongings or a dog, with any receptacle for collecting money or with her arm/hand outstretched.

The order carries a power of arrest if the above conditions are breached and will remain in place for a year, with an expiry date of 29 January 2021 at 4pm.