Blackfriars Priory which has played host to hundreds of happy couples tying the knot, is celebrating winning an international wedding award. 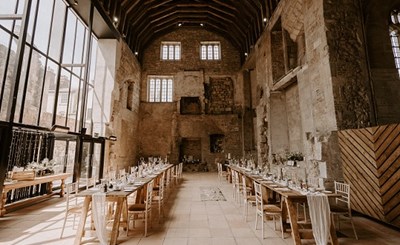 The beautiful and historic venue owned by English Heritage and managed by Gloucester City Council who took over the lease in 2012, was named the Local Rounds Winner in the International Wedding Awards 2021.

The 13th century scheduled monument, which is one of three best rated top historic landmarks in Gloucester, scooped the award after submitting some of the many five star reviews given to it by newly weds.

Couples giving it their seal of approval on review websites described it as an ‘absolutely stunning building and the perfect wedding venue’ while another review said it as the ‘most beautiful place to get married’.

The latest accolade adds to a string of awards and nominations for the priory that boasts a private courtyard garden and the oldest most well preserved medieval library in the country.

It recently reopened following lockdown and is already getting booked for weddings taking place next year and in 2023, with prospective brides and bridegrooms coming from as far away as London and Cornwall.

Founded in 1239 on a site that had once been part of a Norman castle, the friary has undergone extensive restoration and is now used for concerts, weddings exhibitions and even yoga sessions.

Councillor Steve Morgan, cabinet member for Culture and Leisure at Gloucester City Council, said: “Blackfriars Priory is a jewel in Gloucester’s crown and we’re delighted that this has been recognised. Congratulations go to the team there who work very hard to make every couple’s day special and who also put on all sorts of exciting and creative events making the most of this extraordinary venue.”