Council honours dedication to the city

A founder of Gloucester Civic Trust and the Gloucester branch of the Royal British Legion have been honoured for their dedication to the city and its residents. 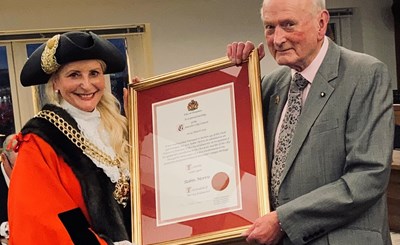 Robin Morris one of the founders of Gloucester Civic Trust in 1972, was made an Honorary Freeman at a special meeting of the council on March 24.

Motivated to action by the demolition of Southern Stores, a Tudor building in the path of a redevelopment in Northgate Street, in the early nineteen seventies, Robin gathered together a group of local people to help protect the city’s historic buildings.

Unfortunately, while they were too late to save Southern Stores, the group, which became Gloucester Civic Trust and this year celebrates its 50th anniversary, has worked to protect other historic treasures.

The chairman of the society for 40 years and now Honorary Life President, Robin also set up Gloucester Historic Buildings Limited as a buildings preservation trust in 1980.

It has saved a number of historic buildings, mainly in the Westgate area, by helping owners source funding, expertise, guidance and above all instilling a determination to preserve the historic buildings of Gloucester. Still active in the Trust, he also volunteers for the Order of St John as well as his many other commitments and was awarded the MBE in 2014.

The Gloucester branch of the Royal British legion has received the Freedom of Entry after being nominated by the Mayor of Gloucester, Councillor Collette Finnegan.

It’s being recognised for their efforts to support the service men and woman of the city and beyond and will receive the honour shortly after the RBL celebrated its 100th anniversary.

The RBL provides unstinting support for the physical and mental needs of service men and women, and their assistance was particularly valuable and ramped up during the pandemic. They work to ensure Remembrance is kept alive and that the sacrifices our brave service men and women have made are never forgotten.

The branch which offers a range of services is also being credited for its considerable work to raise money for former servicemen and women especially through the poppy appeal.

Councillor Richard Cook, leader of Gloucester City Council, said: “The city owes a considerable debt of gratitude to both of these recipients and these awards are thoroughly deserved. They are compelling examples of what a dedication to the city and its people can achieve and without their contributions we would in many ways be a poorer city in which to live. It’s the council’s honour to recognise them and their efforts.”

Councillor Jeremy Hilton, group leader for the Liberal Democrats at Gloucester City Council, said: “This is an award that is thoroughly deserved. The work Robin Morris has done over the last fifty years with the Civic Trust and its efforts to preserve and restore Gloucester’s historic buildings, is exemplary. I’m delighted to support him becoming an Honorary Freeman of the City of Gloucester.”

“The Royal British Legion does sterling work in supporting veterans from the British Armed Services. Awarding the local branch the Freedom of the City of Gloucester has my support and that of my group. This would follow on from other places that have done the same such as Birmingham, Tamworth and Stafford.”

Councillor Terry Pullen, group leader for the Labour Party at Gloucester City Council, said: “I have no doubt that it is totally appropriate for us to be honouring both Robin Morris and the Gloucester branch of the Royal British Legion. It is justly deserved and recognises the immense commitment Robin has made in establishing the Civic Trust and in so doing keeping much of Gloucester’s heritage and preserving buildings that might otherwise have been demolished. The support the legion gives to members of our armed forces and their families is exemplary. The organisation works tirelessly all year around to make sure that remembrance is recognised and that the sacrifices of our service men and women are never forgotten.”

Councillor Collette Finnegan, Mayor of Gloucester, said: “I’d like to congratulate both Robin Morris and the members of the Royal British Legion and I’m delighted that we are giving them both these awards. Their public spirited dedication makes me very proud of our city and the fantastic people that we have here.”

Robin Morris said: “I am delighted to accept this award on behalf of all members of the civic trust who as volunteers have worked tirelessly over the years.”