Ashley Green, former Chief Executive of Gloucester City Homes (GCH) has been recognised for his extraordinary length of service including his huge contribution to delivering affordable housing in the city. 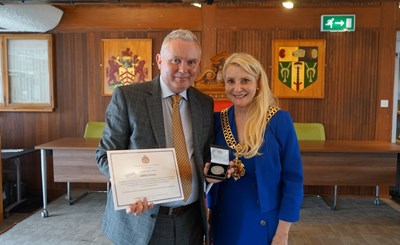 Gloucester-born Ashley Green started working life in 1977 at Gloucester City Council aged 16, and spent the bulk of his career there, rising to head of housing services.

In 2005 Mr Green was appointed as the Chief Executive of Gloucester City Homes.

Gloucester City Homes has to date delivered more than 300 affordable homes, with plans for a further 400 by 2025.

Mr Green is most proud of securing almost £40million Government funding in 2007 to invest in tenant’s homes; as well as being able to provide ‘safe and secure’ affordable housing to the residents of Gloucester.

Cllr Collette Finnegan, Mayor of Gloucester, said: “It is with real pleasure that I am able to award the Mayor’s Medal to Ashley Green in recognition of his extraordinary length of service, as well as his huge contribution to the delivery of new affordable housing in Gloucester.

“I want to congratulate Ashley on his remarkable achievement and on behalf of Gloucester City Council, thank him for his hard work, determination and commitment to our city.”

Ashley Green, said: “I was very honoured to receive this award from the Mayor and it is a fantastic tribute to the hard work and dedication of all GCH colleagues, working so hard to support our tenants in the heart of Gloucester. So, this recognition is for them and I am proud of everyone associated with GCH’s success over the years and I know the organisation will continue to go from strength to strength. Finally, it was fantastic to meet the Mayor and also to link up with colleagues who have supported me and GCH over the years.”