Dean to be made Honorary Freeman for his dedication to Gloucester 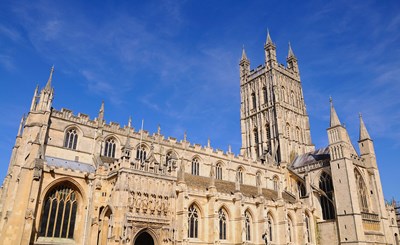 Dean Lake is leaving Gloucester after 11 years to become the Bishop of Salisbury and will be awarded the freedom of Gloucester later this month (February 24) for his dedication to the city and its residents.

He was put forward by the Mayor of Gloucester, Councillor Collette Finnegan, who will also present the award at a civic service at Gloucester Cathedral on March 6.

The accolade recognises his considerable contribution and his work to ensure that the cathedral sits at the heart of city life, playing an active role in the cultural, economic, environmental and spiritual regeneration of Gloucester.

One of his most notable achievements during his time in the role has been in driving Project Pilgrim, a conservation and regeneration project aimed at making the cathedral an inviting place for people of all faiths.

He has also worked closely with the council on many initiatives in particular helping to steer the development of the city. He chaired the Regeneration Advisory Board which has overseen over hundreds of millions of pounds of investment and subsequently took over the chairmanship of the City Centre Commission

Among his other contributions are founding and chairing Gloucester’s Heritage Forum, supporting the city council and Gloucester Culture Trust to secure and deliver the Great Place scheme and helping to ensure the development of the Cathedral Quarter High Street Heritage Action Zone

Councillor Richard Cook, leader of Gloucester City Council, said: “I’m delighted that the council will be recognising Dean Lake for the important role that he has played in the city and for his leadership which has made the cathedral a key partner for the council. In particular, we appreciate the work that he has done to help support the huge scheme of regeneration that has taken place across Gloucester, which has helped transform the city.”

Councillor Jeremy Hilton, group leader for the Liberal Democrats at Gloucester City Council, said: “I congratulate Dean Stephen Lake on his appointment as the Bishop of Salisbury. He will be a big loss to Gloucester. As the Dean, Stephen led the way in delivering Project Pilgrim, which created the new public space outside the cathedral and other improvements inside. I have enjoyed working with him on the Regeneration Advisory Board and more recently the City Centre Commission. I am delighted to support him becoming an Honorary Freeman of the City of Gloucester.”

Councillor Terry Pullen, group leader for the Labour Party at Gloucester City Council, said: “The Honorary Freeman award is very fitting and well deserved by Dean Lake. He has done so much for the city and will be missed. We wish him good luck as the new Bishop of Salisbury.”

Dean of Gloucester, the Very Revd Stephen Lake, said: “I am grateful for this honour. It has been wonderful to play a part in the regeneration of our great city over the last decade and to strengthen the links between the cathedral and the city whose name we share. Gloucester is a great city with so much to offer, and so much more to come.”