A drone video has captured the £5m transformation of Kings Square in action, with a film of the site showing the progress made by local building firm E G Carter. 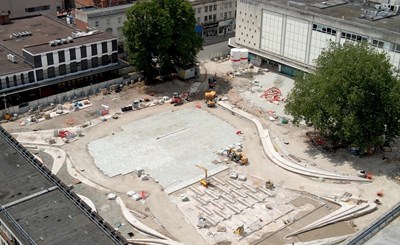 The video was commissioned by the Gloucester based firm which was appointed by Gloucester City Council in autumn 2020 to take forward the plan to totally transform the city centre square.

Features in the new square will include sweeping granite seating areas, which can already be seen taking shape in the video, alongside fountains, trees, and atmospheric coloured lighting. The design concept takes inspiration from the Severn Bore – a spectacular tidal surge that occurs along the River Severn.

The vision is to transform Kings Square into an inspiring and enjoyable destination for city residents and visitors which can be used for events and entertainment, as well as for outdoor dining, and markets.

It is intended that a full programme of events and activities will be planned for the square to attract visitors throughout the year.

Councillor Richard Cook, Leader of Gloucester City Council, said: “We know how eager people are to see the progress being made in Kings Square and this footage gives them an excellent view of what’s taking shape. Kings Square is a key part of the massive regeneration scheme that is taking place in the city and will be right at the centre of things particularly when the university reopens the Debenhams building, Jolt artist’s studios launches at Kings House and The Forum development progresses. It’s an exciting time for Gloucester and over the next year we’re going to see lots of projects taking shape and really putting Gloucester on the map.”

Sam Carter, Director at E G Carter & Co Ltd, said: “Works are progressing well on-site at Kings Square, this regeneration project is hugely important to the city as well as the local community, it will forge a bond that incorporates some of its historical features such as the fountains and new elements that has taken inspiration from the Severn Bore. We are excited that we are over half way and looking forward to seeing the project take pride of place in the centre of town.”

Kings Square forms the centrepiece of a wider £85million scheme by the council, working in partnership with developer Reef Group, to regenerate the Kings Quarter area to create The Forum - a new social and digital campus for the South West, designed to act as a catalyst for the emerging digital and cyber sector. Work to construct Phase One of The Forum is currently on site.

Esther Croft, Development Director at Reef, said: “A regenerated Kings Square is a key component of the wider transformation of this part of the city through the creation of The Forum – a world-class, mixed-use campus that will ensure Gloucester’s success as a future-ready place.”

Completion of the Kings Square project is expected in late 2021. Watch the video here: https://egcarter.co.uk/news/kings-square-drone-footage-construction-progress.