Visitors to Kings Square this Saturday (April 30) will be in for a jam-packed day of performances and free family entertainment. 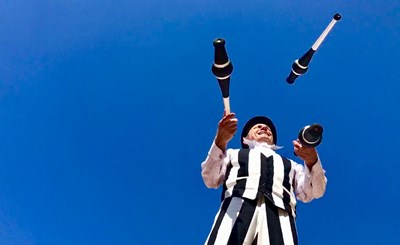 The day will mark 50 years since the square was first opened in 1972, and aims to showcase the square as an events space by featuring lighting displays, dance performances and a dramatic high wire walk.

It will show off the newly revamped square’s design based on the Severn Bore, the tidal surge along the River Severn, and its sweeping granite seating areas, water fountains and atmospheric coloured lighting.

Starting at 1pm there will be a ribbon cutting for the square by the Mayor of Gloucester alongside a routine from the dancing fountains set to music specially composed by Gloucester based charity, The Music Works.

From 1.30pm, Avante Garde Dance will perform Scrum that will transform the square with an electrifying hip-hop dance theatre performance for all ages. Scrum overlaps live performance with virtual reality content and spectators are invited to scan the unique QR code to access hidden virtual layers.

For families there’ll be circus skills classes for families from 1-5pm by Bristol Circus School, Circomedia, alongside demonstrations by Gloucester Swing Dance throughout the afternoon.

As dusk approaches a new set of performances take centre-stage in the square. From 6pm DJ Kevin Clubs and hosts Thomas Trilby and Solo Circus will take the audience through an evening of lively entertainment.

At 6.30pm Strike a Light and Avant Garde will perform for the first time a giant dance flashmob which has been specially created for the launch with over 100 dancers from across the city.

Councillor Richard Cook, leader of Gloucester City Council, said: “This will be a fantastic event and we invite residents to come and enjoy a great family fun day. This is a chance to see the new square and what is possible with the fountains and newly installed lighting. As the rest of the Kings Quarter takes shape with the development of the hugely ambitious digital quarter bringing new businesses, bars and restaurants and a four-star hotel, we know the square is going to become a hive of activity and a new destination for Gloucester.”