Gloucester City Councillors are set to welcome a report on the massive regeneration that has taken place since the launch of an ambitious economic strategy. 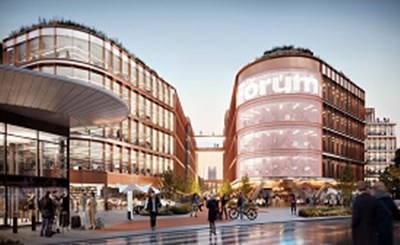 Gloucester’s Regeneration and Economic Development Strategy set out a plan to kick start the ‘renaissance of the city.’

Launched in 2016 it identified three priority areas where the Council and its partners would focus on boosting regeneration - Kings Quarter, Blackfriars and Gloucester Docks and Quays.

At next week’s Cabinet meeting, Councillors will hear how significant strides have been made as part of the strategy in particular at Kings Quarter where work has already commenced on the first phase to provide 17 new apartments and a new location for the existing Tescos store in Grosvenor House. Phase 2 will commence in the autumn.

In total, £107m investment has been approved to deliver The Forum, a mixed use development comprising new homes, in excess of 100,000 sqft of grade A office space and Gloucester’s first 4 star hotel.

Gloucester contractor, EG Carter, have been appointed to undertake the £5m redevelopment of Kings Square and the Council’s development partners, Reef Group are set to redevelop Kings Walk with a major retail occupier taking the former BHS unit and a multi million pound refit currently underway.

The development complements the award winning bus station opened in 2018 which will soon be followed by the redevelopment of Gloucester Railway Station with improvements to the underpass, car park and station as well as a new junction on to Metz Way following a total of investment of £6million from Gfirst LEP and the Government

Also on track is the development of the Blackfriars area where 200 new homes are planned at the former Gloucester Prison site and the first phase of 300 new student apartments was completed with more to follow along with office and business accommodation.

Other exciting developments include the redevelopment of the Grade 1 listed former Fleece Hotel by Dowdeswell Estates and the Cathedral Quarter programme which has brought a further £1.9m investment to the city centre

The Quays has seen the successful the addition of 47 high quality apartments at Provender Mill by owners Rokeby Merchant as part of a wider redevelopment of Bakers Quay including a new hotel, bar, restaurant and other food and beverage outlets with the development of two Grade 2 listed former warehouse buildings to follow.

And work recently concluded on the redevelopment of the former Kwik Save site on Black Dog Way by Rooftop Housing Association to create 95 affordable homes. Gloucester City Homes and Cape Homes also completed 24 new affordable rent flats at the historic Tanners Hall site on the corner of Worcester Street and Gouda Way.

Councillor Richard Cook, leader of Gloucester City Council, said: “It’s a very exciting time for Gloucester. The huge scale of regeneration that has taken place across the city is only set to continue and bring more investment into the city boosting our local economy, helping businesses and providing jobs.”