Located within Hucclecote and Barnwood Wards

There are several locations of works proposed covering Barnwood Park, Appleton Way, Porchester Road, Clock Tower and Saintbridge Dry Basin. The intended works at these locations are as follows: -

At Barnwood Park we intend to create wetland areas within the balancing pond.  The wider area will be subject to meadow creation and planting which will be maintained accordingly.

In the existing balancing pond at Appleton Way we plan to have wetland area scrapes with the location benefiting from wildflower meadow creation and tree planting.  Improvements to access are planned to allow maintenance vehicles access and egress.

A new drainage strategy is to be created along a small section of Porchester Road. This will divert road run-off into a swale before discharging into the Wotton Brook. This will improve water quality and reduce flood risk. The local green space will be cultivated for wildflower meadow creation with a mown path for pedestrian access.

Clock Tower balancing pond and surrounding area is proposed to be partially cleared to allow for wildflower meadow and native tree planting.

At Saintbridge dry basin we intend to create a wildflower meadow to provide for pollinators and create a link with the River Twyver and Sud Brook.

Unfortunately the weather during August was not in our favour which resulted in the ground becoming too sodden and hampering the proposed groundworks across all sites.  This has led to programme slippage and ultimately in several locations missing the wildflower seed planting window.

The programme slippage has meant that Porchester Road scheme and the seeding of Appleton Way basin has been deferred to next year.

Seeding has been successfully carried out at Barnwood Park, Clock Tower, Saintbridge dry basin and the M5 corridor.  The process of creating bare earth for the wildflower seed to germinate may leave the sites looking a little worse for wear until the meadow is established.

Following the wildflower seeding a specific maintenance regime is to be followed.  This will typically include in the 1st year regular cutting of the site to reduce the competition of the weeds and native grasses (except those areas where Yellow Rattle has been sown).  After this the area will be subject to a cut & collect regime that mimics historic meadow management by grazing.  This will be in the form of a spring cut in April to prepare it for flowering through the summer.  Once the meadow has flowered a main summer cut, referred to as a hay cut, will be carried out between June and August depending on what is flowering.  In some instances we may then carry out an autumn cut in late November to keep weeds and weed grasses at bay to allow the wildflowers to persist the following year.

Mown paths and areas that have not been treated or sown for wildflower meadow will be maintained as previously with regular close mown cuts throughout the year.

Wetland habitat scrapes have been formed at Barnwood Park and the wider site is being prepared for wildflower seeding this autumn.

The process of creating bare earth for the wildflower seed to germinate may leave the site looking a little worse for wear until the meadow is established.

Once established the wildflower will be cut twice a year; one late summer cut after flowering and a second cut in autumn.

Landscaping works to create a wildflower meadow are planned to commence soon at Saintbridge Dry Basin.  The following plan indicates the proposed layout: 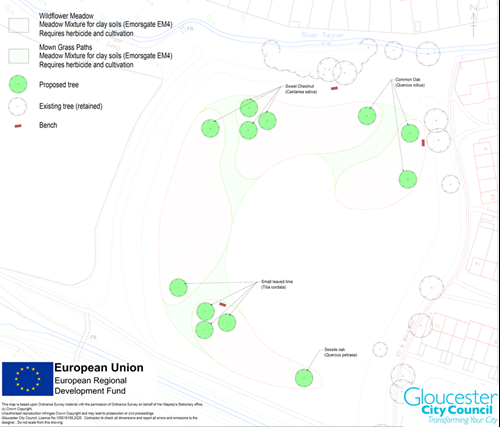 Short mown paths are to be cut following current desire lines that are intended to continue to allow users to walk around the flood basin.

We are pleased to announce that works are able to start at these sites following the on-going Covid-19 restrictions.  Appleton Way and Barnwood Park are scheduled to start this month.  Site notices have been put up and a localised letter drop was carried out to keep residents informed.

Drawings for Appleton Way are presented below.

Following comments from the public we have now reduced the coverage of the wildflower meadow in Barnwood Park.  The area under the existing rugby posts will be approximately 60m² of amenity grass.

Porchester Road area is scheduled to mid June.  The aims of the works here are to reduce the risk of flooding by creating swales to aid with the highway drainage and improve the habitat for wildlife and pollinators with the introduction of wildflower meadow, bird boxes and native bulb and tree planting.

The latest drawings for Porchester Road are below.

Here are answers to the most common questions asked about the Urban Greening project at Barnwood Park.

Will there be open grass areas?  A large area surrounding the existing rugby posts is to be retained as 'amenity grass' with the overall wildflower meadow cut short twice a year.

Are any paths being kept?  Within the wildflower meadow we will provide several mown paths that replicate the current routes and desire lines observed on site.

Will we be able to bring our dogs?  There are no plans to exclude dogs from the basin site.  The proposal provides a much more interesting, varied and pleasant landscape that will improve everyone's visit, including dogs.

In this month we will be carrying out localised tree and vegetation clearance works across the various sites.  The following sketch shows the proposed works for the Barnwood Park site that comprises wildflower meadow and wetland habitat creation.  Two new benches are proposed to allow visitors to take in the dramatic colours of the meadows when they are in full bloom. 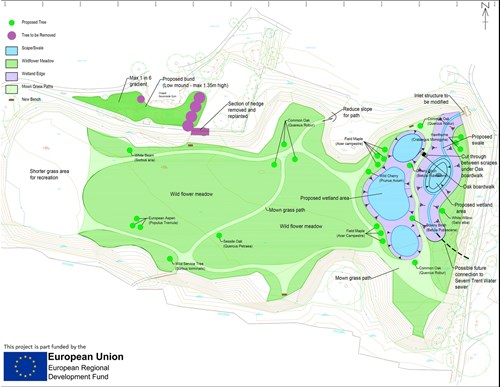 Design of the other sites is still underway, drawings will be posted as soon as they become available.

Design work for all these sites is currently underway.  When ready, details will be posted on here.