Ben Uri is delighted to be working in partnership with Gloucestershire Action for Refugees and Asylum Seekers (GARAS), The Museum of Gloucester and Gloucester City Council to present the exhibition Migrations: Masterworks from the Ben Uri Collection. 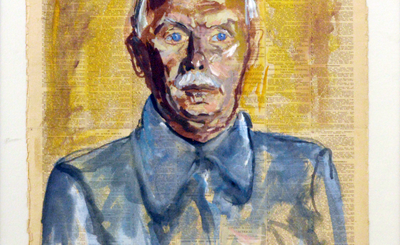 Ben Uri is delighted to be working in partnership with Gloucestershire Action for Refugees and Asylum Seekers (GARAS), The Museum of Gloucester and Gloucester City Council to present the exhibition Migrations: Masterworks from the Ben Uri Collection. This important exhibition marks two significant anniversaries: the twentieth year of refugee organisation GARAS and the introduction of the Kindertransport which, between December 1938 and September 1939, brought some 10,000 Jewish refugee children to Britain.

The second wave reflects the artistic contribution of the so-called ‘Hitler-émigrés’, who between 1933 and 1945, fled racial, artistic or political persecution in their native lands. This included both established artists, such as Martin Bloch, Hugo Dachinger and Margaret Marks, and younger refugees who went on to train and work in Britain, including Frank Auerbach and Eva Frankfurther, and Kindertransportees Kathe Strenitz and Harry Weinberger.

For many hundreds of years people who have had to flee their homeland have found refuge in Gloucestershire. Today there are still people from all over the world seeking asylum and living in the County. Even in troubled times, leaving home can be the hardest of all things to do, so a welcome, sympathetic ear and realistic practical advice and encouragement are the most precious gifts one can give when such a person arrives in a new place. GARAS opens the door to support those seeking asylum in Gloucestershire, welcoming them when they arrive, advocating for them in their daily struggles, supporting them if they face being sent back and helping them adjust to their long-term future if they are recognised as ‘refugees’.

Ben Uri’s own history is one of migration: founded in London’s East End in 1915 by Jewish Eastern-European émigré artisans working outside the cultural mainstream, who went on to form a significant collection of works by artists of British and European Jewish descent. Since 2000, the remit has expanded to include works by immigrants from a wide range of cultural, religious and geographical backgrounds. 2019 has also seen the launch of the newly formed Ben Uri Research Unit for the Study of the Jewish and immigrant contribution to the Visual Arts in Britain since 1900.

Countdown to the start of Lives of Colour: I-MMIGRATE Exhibition...