The Mayor and The Sheriff

The Role of the Mayor

The Mayor is the first citizen of the City of Gloucester and acts as Chair of the Council. The Mayor represents the Council and the City at civic, ceremonial and community events both inside the City boundaries and elsewhere.

By virtue of his/her office, the Mayor is in a unique position to relate the work of the Council to the community it serves. The long mayoral tradition in Gloucester is a vitally important link between the Council and the many organisations, voluntary and otherwise in the City.

It is important that the Mayor should be able to discharge the functions, responsibilities and duties of the office effectively and that there is a clear understanding of the mayoral and civic role. The Mayor and Sheriff are both appointed each year at the Council’s Annual meeting and serve for a period of 12 months; nomination rights for the offices of Mayor and Sheriff are rotated between the political groups on the Council based on the proportionality of seats held.​

These notes are intended to describe the office of Mayor and some of the more important aspects of civic procedure and protocol, which apply here in Gloucester. It is hoped that this handbook will be of help to the Mayor and Deputy Mayor/Sheriff as well as to those who support the civic leaders in carrying out their roles.

Inviting the Mayor or Sheriff/Deputy Mayor to events

If you would like to invite the Mayor or Sheriff/Deputy Mayor to an event, please complete the online form available here. When booking, please give no less than 10 working days’ notice from date of event.

The Right Worshipful Mayo​r of Gloucester 2019-20

I am married to Karen and have two children and two grandchildren all living in Gloucester.  In my early years I attended and played rugby for the Crypt Grammar School and then went on to work as an apprentice in Industrial and Commercial Photography at Fielding & Platt, then onto the Nuclear Research Laboratories in Berkeley as a Scientific & Industrial Photographer.

I was elected as a Gloucester City Councillor for Tuffley in 2010 and was appointed as the Cabinet Member for Housing, Environmental Health & Leisure in 2011.  On re-election in 2014 I was appointed as the Cabinet Member with responsibility for Strategic Housing & Planning.  In this role I have overseen the transfer of the Council’s housing stock to Gloucester City Homes and the adoption of the Joint Core Strategy, which sets out the development plans for Gloucester, Cheltenham and Tewkesbury until 2031.

I have also driven improvements to Robinswood Hill and has been working with Gloucestershire Wildlife Trust to deliver a new visitor centre on the site.

My duties have also included being a Board member for Culture Tourism & Sport for the Local Government Association and as a Board Member for the Tourism Alliance and Non-Executive Director for Gloucester City Homes.

My previous private and mutual sector work includes holding a Director Designate role with National House Builder Westbury Homes PLC, Non-Executive Board position as Chair of Marketing with the Holloway Friendly Mutual Society and as owner of my own property consultancy and agency in Gloucester.

I am very passionate about my home city, the great people and the opportunities it offers now and for future generations.  Part of that passion has developed, amongst other projects, with me creating, designing and organising the award-winning Gloucester Classic and Retro festival, which takes place in August each year.  The event reflects living history and its transport, people, fashion and music with an aim to increase footfall into the city centre to help its shops, businesses, charities, employment and regeneration prospects.  The festival raises awareness for those suffering from dementia and Alzheimer’s which together with the MS Therapy Centre and Gloucestershire Young Carers forms the chosen charities for 2019/2020.

I am very honored to be elected as the First Citizen, Mayor of Gloucester and will continue to help drive goodwill and progress in all aspects of the City.

The Sheriff and Deputy Mayor of Gloucester 2019-20 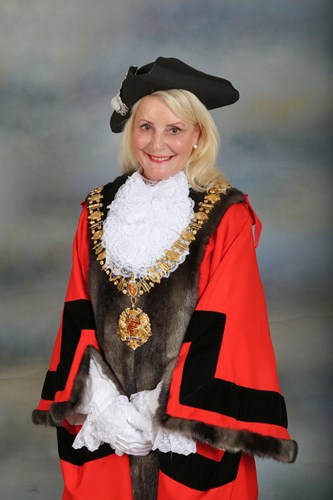 I am highly honoured to have been selected to serve as Sheriff for 2019-20 after becoming a City Councillor for Abbeydale Ward in 2016. As Gloucester City Health/Mental Health Champion I have promoted health issues such as Gloucester becoming dementia friendly and raised funds for different projects, including a successful partnership with Gloucester Rugby and I certainly aim to carry on this work during my time in office and beyond. For over 30 years I had a career in medicine and held senior management positions in numerous settings, including military hospitals. I worked with vulnerable families and was involved with serious child protection cases. I grew up in Birmingham and Dublin and have lived in Gloucester for 25 years. My spare time is devoted to my grandchildren and Harry, my Golden Retriever.

National Association of City and Town Sheriffs of England and Wales

For more information on this national association please visit​ the NACTSEW website.

A Brief History of The Mayor and Sheriff of Gloucester​

The first recorded Mayor of Gloucester was Richard the Burgess, who derived his authority from a royal order in 1228.

No other use of the title is recorded until the Letters Patent of Richard III in October 1483, by which time the burgesses of Gloucester were given the right to elect their first mayor. The first person to hold this position was John Trye.

John Trye's occupation is not recorded, but he left his estate to the Master and Wardens of the Weavers Company when he died, so he may have been a weaver.

The royal charter of 1483 also made provision for twelve aldermen, two sheriffs, 4 stewards and 22 others to manage the affairs of the area. To maintain the dignity of these new officers it also provided that the mayor should have a sword of state carried before him with two sergeants at mace to serve him.

The role of the Mayor was different to today as one of the main duties was to go to church twice a day in a procession. They were also responsible for dispensing hospitality to distinguished visitors and for the maintenance of civic property. They were a justice of the peace, presided at local courts and were responsible for the custody of prisoners. They also held the position of clerk of the market which meant they were responsible for seeing that weights and measures used in local commerce were correct.

They held the position of steward and marshal of the King's household, as far as Gloucester was concerned, and had seniority over the stewards and marshals of England within the bounds of Gloucester. They were also 'escheator' for the County of the borough of Gloucester which meant they were responsible for taking control of properties which were left without an heir.

John Trye died in 1485 but the position of Mayor has been held uninterrupted since that date.

The first woman Mayor was Mrs Lilian Embling who was elected to the office in 1965.

Paul James was elected to Gloucester City Council in 1996, at the age of 22, and became Sheriff and Deputy Mayor of Gloucester in 2002 making him one of Gloucester’s youngest known Councillors and Sheriffs.

The Mayor’s Chain and Badge

The Mayor’s chain and badge of office are of 18-carat gold, the form being a double row of a hundred horse-shoe links. The central link, from which depends the badge, bears a representation, in coloured enamel, of the cap of maintenance. The badge bears, on an oval shield within elaborate scroll-work, the arms of the City of Gloucester in red enamel, and the motto “Fides invicta triumphat”.

The Mayor’s chain and badge were purchased by subscription at a cost of £220 and presented to the Corporation in April 1870.

In 1932/3 the mayor of the day, W.L. Edwards, had the horseshoes reversed. They had been mounted with their points downwards, and he had them replaced points upwards. This reflects the modern idea that the luck of horseshoes is trapped within the bowl formed by the bow of the shoe. Theodore Hannam-Clarke became mayor for 1933/4 and remembered the chain as his father had worn it – with the shoes pointing down. After a year-long debate, which attracted national media attention, and the discovery that there had been no council approval for the action, the chain was restored to its original form!

The ancient office of Sheriff or Bailiff, as it was sometimes called, is perhaps the oldest of what are known as Civic offices, and usually many hundreds of years older than that of Mayor, in most towns and cities.

From 1066, towns and cities were administered for the king by a reeve - (the term Sheriff derives from Shire Reeve).

In Gloucester, our office of Sheriff is nearly 500 years older than the City Council. King John's Charter of 1200, at a time when local government in Gloucester was by the general meeting of the Burgesses, is the first to specifically give the right to have two bailiffs to perform the role of sheriffs.

The Sheriff was originally the agent of Royal jurisdiction in Gloucester. He presided over the local courts, he had powers of summons and distraint, he held prisoners and collected fines and taxes. He executed Royal writs, such as those to repair the castle and provision the army. Most of these duties continued into modern times - he remained personally responsible for the tax field until 1732, and summoned courts until 1974.

The 1483 Letters Patent of Richard III provided that there should be two Sergeants-at-Mace to serve the two Sheriffs. Ever since, on formal occasions they have joined the Mayor's macebearers and preceded the Mayor and Sheriff in procession. The Municipal Corporations Act of 1835 reduced the number of sheriffs to one.

The National Association of City and Town Sheriffs of England and Wales was founded in Gloucester 1985 by the then Sheriff of Gloucester, Councillor Andrew Gravells.

The Sheriff's Chain and Badge

The Sheriff’s chain and badge of office were presented to Mr Henry Jeffs by his brother Freemasons when he was Sheriff in 1883. Mr Jeffs gave the chain to the Corporation at the end of his term of office for the use of future Sheriffs.

The chain is made up of alternate links of garter and shield, with mural crowns at the top and blocks containing emblems of the Sheriff’s office in front, comprising the sword and fasces, with axe and mace. These are linked up with the national emblems of the rose, shamrock and thistle, joined together. The central link is a larger garter and shield surrounded with the royal crown, and bearing on the centre of the shield the monogram “HJ” in purple enamel and “Royal City of Gloucester” in the garter in blue enamel. On each side of this are the coats of arms of the See of Gloucester and of the old city of Gloucester, the former having in the centre the episcopal keys and the latter the old castle.

The badge consists of the City arms in repousse work, comprising a wreath of oak and laurel surrounding a garter and two rampant lions, with the Royal arms in red enamel at the top, and a ribbon bearing in purple enamel “Caer Glou”, the earliest known name of the City, and on another ribbon the City motto “Fides invicta triumphat”, also in purple enamel.

The sword and axes are in platinum and the whole of the other portions of the chain are made of 18-carat gold.